1 - You have been hired by a specialty chemical company that has been researching the physical properties of acetone (a common chemical for removing nail polish). The company observed that at an unknown temperature, acetone exhibited the same heat capacity as water. The company found the following quadratic equation for the heat capacity of acetone as a function of temperature

You have been hired to determine the temperature at which acetone has the same heat capacity as water (assume that water has a constant heat capacity of 75.6 J/(mol ⋅ K)) on a per mol basis. Finally, the company has two additional requirements:

(1) you need to determine an equation for the change in heat capacity as a function of temperature, that is, dCp dT , and 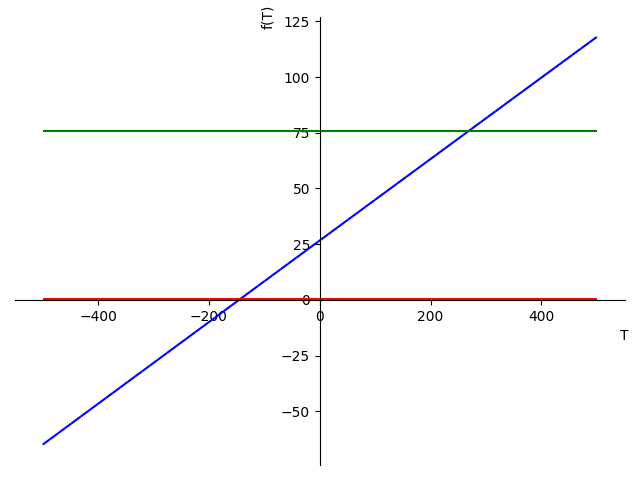 2 -You have been hired by the recently reformed La Vie Claire cycling team (this is the team that Greg LeMond won the Tour de France with in 1986 – see the ESPN 30 for 30 documentary, “Slaying the Badger”). The new team manager knows a little physics and made an interesting observation while studying the standard fluid dynamics equation describing the drag force on a body moving through air (or any Newtonian fluid):

where FD, the drag force, is approximately equal to the force the rider is applying to the pedals (neglecting mechanical resistance) when riding on a flat surface. The team manager claimed that for a given force from the rider, the equation should have two solutions for the velocity, V, because it is quadratic. The manager further asserted that if riders could change their velocity somehow, they could shift their velocity to the other, faster solution to the equation without having to change the force on the pedals. You have been hired by the team owner to investigate this claim. Using symbolic mathematics software, show that there is only one positive velocity solution to the equation if FD, the force, CDA (the drag coefficient multiplied by the rider’s frontal or cross-sectional area), and 𝜌 (the density of air, 1.0 kg∕m3) are all positive. The second half of the owner’s request is that you calculate the cyclist’s velocity (in meters per second and miles per hour) using the following assumptions: • Professional cyclists perform 10,000 kJ/day of work • In a major race, cyclists ride 250,000 m/day • Work is force times distance (i.e., force is work over distance) • CDA for a cyclists alone on the road is 0.7–0.9 m2 Finally, estimate the velocity of the same cyclist in a group where each cyclist can draft off the person in front of them, thus reducing CDA to 0.5–0.7m2.